Why is my iPhone logging my location? The iPhone is not logging your location. Rather, it’s maintaining a database of Wi-Fi hotspots and cell towers around your current location, some of which may be located more than one hundred miles away from your iPhone, to help your iPhone rapidly and accurately calculate its location when requested.

But critics say online education is really driven by a desire to spend less on teachers and buildings, especially as state and local budget crises force deep cuts to education. They note that there is no sound research showing that online courses at the K-12 level are comparable to face-to-face learning.

We’d been discussing doing a visualization of mobile data, and while he was researching into what was available, Alasdair discovered this file. At first we weren’t sure how much data was there, but after we dug further and visualized the extracted data, it became clear that there was a scary amount of detail on our movements. It also became obvious that at least some other people knew about it, but it wasn’t being publicized. 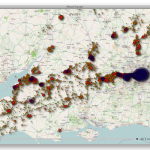 « This open-source application maps the information that your iPhone is recording about your movements. It doesn’t record anything itself, it only displays files that are already hidden on your computer ».

DI DIRECT drives Photoshop from your iPad
(via DI magazine)

In February 2011, there was just under 10,000 visitors to USASpending.gov, which is a small number by Web standards. To make things worse, it reportedly costs $4 million per year (about $333k per month) just to keep the site going. I’m not going to pretend to know how federal budgets work, but that seems a bit high.

BBC HD – The Beauty Of Maps 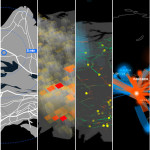 House Joint Resolution 37, which was approved by a vote of 240 to 179, was spurred by the F.C.C.’s approval in December of an order titled “Preserving the Open Internet.” The order forbids the companies that provide the pipeline through which consumers gain access to the Internet from blocking a user’s ability to reach legal Internet sites or to use legal applications.