In a reversal, Apple Inc. relaxed its guidelines for digital content sales through its App Store, giving in to publishers and other content owners that had balked at the restrictions.

European Union data protection regulators said on Wednesday that they would investigate Facebook over a feature that uses face-recognition software to suggest people’s names to tag in pictures without their permission, and a privacy group in the United States said that it planned to file a complaint with the Federal Trade Commission over the feature. 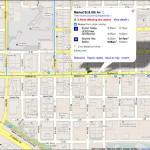 (via Official Google Blog: Know when your bus is late with live transit updates in Google Maps)