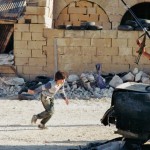 « By publishing a clip that could appear to be authentic we hoped to take advantage of a tool that’s often used in war; make a video that claims to be real. We wanted to see if the film would get attention and spur debate, first and foremost about children and war. We also wanted to see how the media would respond to such a video ». (via BBC News – #BBCTrending: Syrian ‘hero boy’ video faked by Norwegian director)