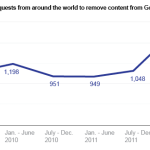 « The number of government requests to remove content from our services was largely flat from 2009 to 2011. But it’s spiked in this reporting period. In the first half of 2012, there were 1,791 requests from government officials around the world to remove 17,746 pieces of content ». (via Transparency Report: Government requests on the rise | Official Google Blog)