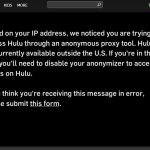 « Hulu, the largest public movie and TV streaming service in the United States, began blocking VPN users this week. The move is an attempt to prevent « pirates » from overseas from accessing videos without permission, but it is also blocking many legitimate users from surfing the Internet securely ». (via Hulu Blocks VPN Users Over Piracy Concerns | TorrentFreak)