“On Monday, Parler’s website was reachable again, though only with a message from its chief executive saying he was working to restore functionality. The internet protocol address it used is owned by DDos-Guard, which is controlled by two Russian men and provides services including protection from distributed denial of service attacks, infrastructure expert Ronald Guilmette told Reuters. ” “The rash of news coverage was no accident: NTK is an affiliate of Definers, sharing offices and staff with the public relations firm in Arlington, Va. Many NTK Network stories are written by staff members at Definers or America Rising, the company’s political opposition-research arm, to attack their clients’ enemies. While the NTK Network does not have a large audience of its own, its content is frequently picked up by popular conservative outlets, including Breitbart. Mr. Miller acknowledged that Facebook and Apple do not directly compete. Definers’ work on Apple is funded by a third technology company, he said, but Facebook has pushed back against Apple because Mr. Cook’s criticism upset Facebook.” “EU versus Disinformation, a site that specializes in dissecting pro-Kremlin disinformation, reports that In The Now is Kremlin-owned. “In The Now successfully brings elements of Russia’s ongoing disinformation campaign to large international audiences,” the site says. “The majority of those who are targeted will not suspect that what they see and share is in fact Russian state propaganda.”” 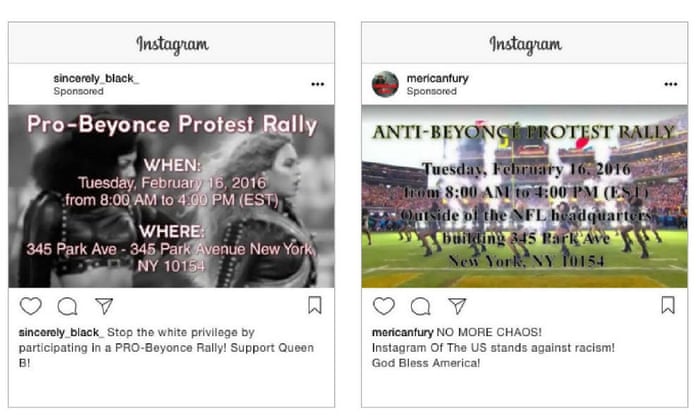 “In one particularly brazen example, ads were run promoting both a “Pro-Beyonce Protest Rally” and an “Anti-Beyonce Protest Rally” scheduled for the same time time and place following the controversy over the artist’s performance at the 2016 Super Bowl. The pro-Beyoncé ad was targeted at users designated as having African American behaviors. The anti-Beyoncé ad was targeted narrowly at people who had studied to become a police officer or whose job title matched a list of law enforcement or military titles, including officer, colonel, major general (United States), master sergeant, commander (United States), sergeant, brigadier general, petty officer, chief petty officer, lieutenant commander, squadron leader, 911 dispatcher or rear admiral”.