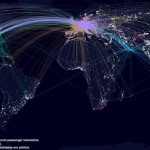 When I mapped the same data a while back, I included a base map of cities, coloured the lines and added a lot of adornments. In some ways, what I did was a little more informative (you can see the cities not served by major airlines for example) but it is much less refined in its visual appearance. (via What’s so Great About a World Flight Paths Map? | Spatial.ly)